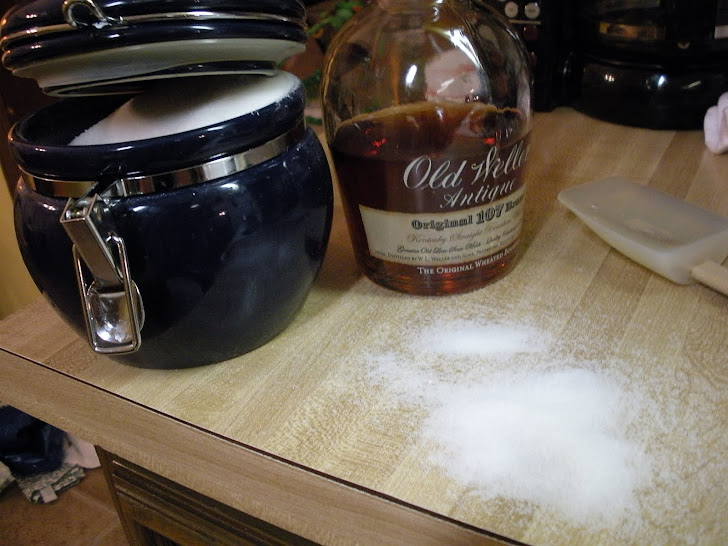 My blessed husband braved the two inches of snow Louisville got today and returned with arms full of produce and cheese.  He's now in our kitchen whipping up this creamy, deceptively simple dessert. 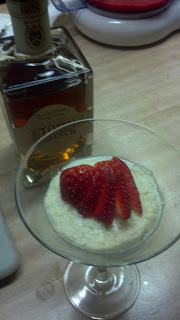 Put all ingredients in your food processor and pulse once to combine.  Scrape down the sides and pulse again.  Scraping makes sure the mixture doesn't separate. Make sure not to overbeat the mixture.  It breaks.  Delicious, but clumpy.

If it needs additional creaminess, add a tablespoon of heavy cream.  (NB: this won't resolve the clumping.)  Spoon into dessert dishes and refrigerate for 20-30 minutes and serve with fresh strawberries, chocolate dessert wafers, or just a spoon! 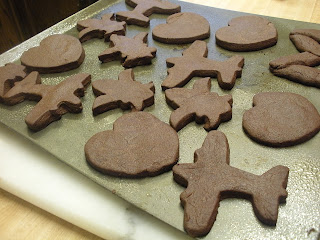 I've never seen the point of shortbread.  Frankly, if I'm going to eat cookies, they'd better have chocolate in them.  Enter this recipe.  It's so rich, I make it about once a year, and it seems especially appropriate to make it in preparation for Valentine's Day.

It's a nasty day outside - lots of sleet, freezing rain, and the occasional flurry.  My plans to finally get all of us out of the house backfired, so I had my eldest assist me this morning. 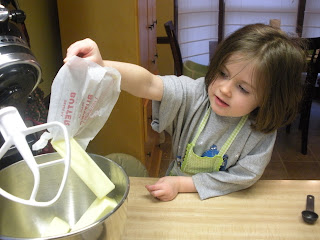 2. Sift together the flour, cocoa powder, cinnamon, and salt in a bowl. (Don't skip this step as cocoa powder has a tendency to clump. Sifted dry ingredients = delightfully tender cookies.) Set aside. 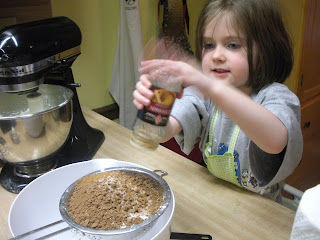 3. Beat the butter and sugar together on medium speed in a mixer for 5 minutes, being sure to scrape down the sides and bottom as needed.  Most shortbread recipes call for the butter to be softened, but honestly, I use it out of the fridge and cream it with the sugar in my stand mixer.  The resulting dough is stiff enough to roll without refrigerating it. 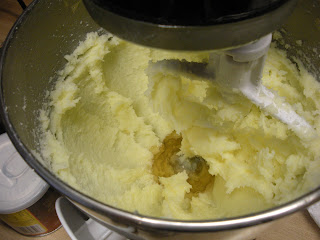 4. Add the bourbon and mix for 30 seconds. Add about half the flour mixture and mix on low speed. Scrape down the bottom and sides and add the rest of the flour mixture. Once incorporated mix at medium speed for 2 minutes. 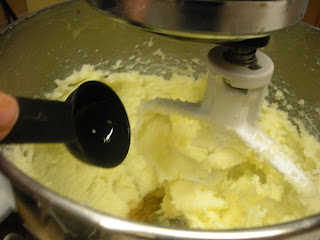 5. Lay out a sheet of parchment paper and place the dough on it. Cover with another sheet of parchment paper and roll out to 1/4-inch thickness with a rolling pin. You can also lightly flour a work space with cocoa and powdered sugar, but I find my method easier. You may find the dough getting too soft. If it does, place it in the freezer for ten minutes to firm it up before you continue rolling or cutting. (The dough is very hard to work with when soft.) Cut into desired shapes and place on the baking sheets about 1-inch apart. 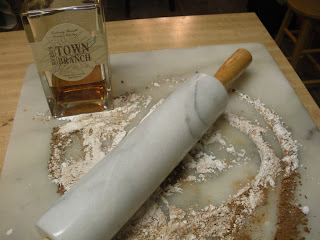 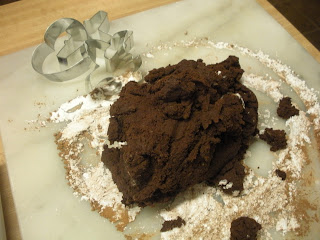 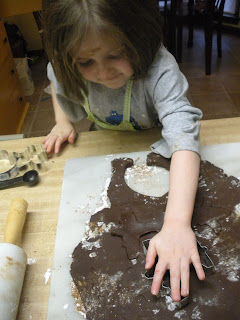 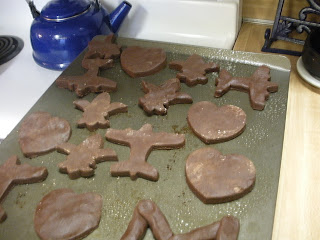 6. Bake for 13-15 minutes, rotating the pans halfway through baking.  Remove the pans and allow the cookies to cool completely before moving them.

A warning: these cookies crack if you look at them wrong. Let them cool COMPLETELY before trying to move them.  Rolling them to 1/4 inch helps too, but using something with out sharp corners helps, too.  The first time I made them, I used a dove cookie cutter.  Fully 2/3s of my doves ended up headless. It reminded me of the duct-taped-headed parakeet from Dumb and Dumber. 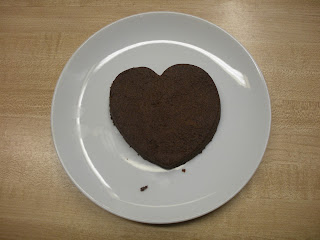 Not Your Grandpappy's Cough Medicine

It's been almost a year since my last post, and several months from the one before that.  A brief update to life on the Bourbon Trail:

2.  I had a baby.  She's awesome and universally adored.  Her father packed a bottle of whisky to toast her birth at the hospital.  He had a bourbon while I breastfed his child and gave him the stink-eye.

3.  We temporarily moved to Indianapolis for my husband's job.  I learned some important things in Indy - the weather is cold, the people are warm, and the restaurant workers know not a thing about bourbon.  I asked what kinds they had at a local watering hole and the woman offered me a selection of two Canadian whiskies, a single malt Scotch, and Jack Daniels.  I ordered a beer.

Which brings us to January 2013.  It's cold and flu season, and being the mother of three small children, one of whom insists on chewing on the Target cart handles when I'm not looking, we've all shared some hellish combination of upper respiratory infection, flu, and what I'm assuming is the black plague.  This has brought a slew of suggestions that I publish a folk remedy involving some magical combination of bourbon, lemon juice, rock candy, honey, cayenne pepper, eye of newt, etc.

I have tried the various permutations of this concoction, most of which are horrid.  I drank a corrosive combination of boiling hot bourbon, lemon juice, and honey for years.  I do not recommend it.  I also do not claim to dispense legitimate medical advice.  This is not medical advice.  Seriously.  Go see a doctor if you're sick.

This is, however, delicious.  It's like a hot drinkable caramel apple, good enough to serve as a post dinner drink (and often is at our house!), and excellent at clearing the sinuses and fuzzing the head.

So what I now present is...Not Your Grandpappy's Cough Medicine.

6 oz. fresh-pressed apple cider (the fresh stuff is better, but if it's not available, any cider will do)
1/2 to 1 shot (1.5 oz) bourbon  Don't waste the good stuff on this.  I used Old Forrester.

Warm the cider in the microwave for 60-90 seconds and stir in the bourbon.  Breathe in the vapor with your mouth open.  Drink it while it's hot, cuddle up with a blanket and a Doctor Who rerun.
Posted by Tiff at 3:55 PM 1 comment:

Happy February, readers!  It's been ages since my last post.  The reason: we received an enormous surprise last month and will be welcoming our newest family member at the end of the summer.  Daisy (as in "oops-a") has put a serious cramp in my bourbon-loving ways, but I still wanted to pass on a little something to put you in a springtime frame of mind. Can't you just imagine sipping these beauties while the steaks are grilling? 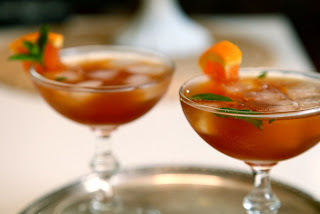 Please test it out and let me know how it goes.  I might just have a pitcher of them waiting for everyone at the other end of the delivery room...
Posted by Tiff at 4:50 PM No comments:

Merry Christmas to All!

An extra merry Christmas to all of you!

Our first Christmas in Louisville is coming to a close.  We spent an extraordinarily late night in the garage constructing on our daughter's single Christmas wish - a pretend kitchen with a window and counter space and a sink and a stove and lots of pretend food and a hook for her apron and a blackboard for the day's menu - out of a broken down entertainment center obtained from Craigslist. 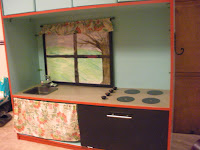 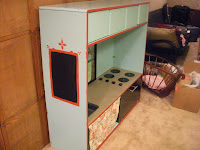 So, we punted on Christmas dinner and served something simple for lunch.  (True confessions: a frozen pizza and jalapeno poppers.)  For supper, we tucked the kids in early and had an easy and elegant dinner for two.  Homemade potato latkes (because really, what's Christmas without Hanukkah food?), smoked salmon, creme fraiche, apple sauce, and a bourbon and ginger, since we opted to save our champagne for tomorrow's belated feast.

To my delight, the bourbon and ginger went perfectly with the smoky salmon and lacy potato cakes.  The sweet smokiness matched the salmon and the crisp ginger ale cut through any heaviness of the fried potatoes.  It's such a simple recipe, it feels silly to post, but just in case you're curious...

Pour together in a glass and enjoy!

I'm looking for recommendations for a high quality ginger ale.  For this, we used Canada Dry.  It was perfectly adequate, but I'd prefer something a little drier.  Please post any thoughts!

Also, I received this from a friend this morning.  It's a great article from the NYT on the current bourbon boom!  (Although reading it did make me wonder if Woodford Reserve was sponsoring it...)

A very merry Christmas to you all, and a happy new year!
Posted by Tiff at 8:48 PM No comments:

Hawk of Achill - Possibly the Best Whisky Commercial Ever.


Enjoy, gentle readers!
Posted by Tiff at 4:36 PM No comments: 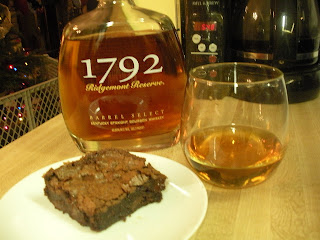